Every Drop Raises the Sea.

Boy o boi is it difficult to keep on task. This week has been a wild flood of incursions on democracy and basic good governance. As of today, the United States doesn't have a State Department. There's a State Department building. There's a Secretary. That's about it. It's like that old chestnut about “what if they held a war and no one showed up?”

“What if they tried to install a fascist authoritarian state, and no one in government was at work?”

i'm keeping a master folder of screenshots and news articles as receipt and check on the assaults to basic norms of shared reality. The subfolders include: 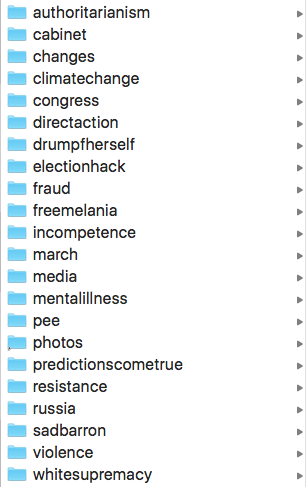 i use file aliases to do some cross‑categorizing, as you might imagine. Do i have a folder about the current President titled pee? Yes i do. That was the gun introduced in chapter one, and i heed Chekhov, i anticipate we'll see the pee by chapter three.

my favorite folder is resistance. The banner that Greenpeace flew above the White House with the word RESIST. An anti‑swastika notice in the New York City subway. The Yale School of Architects writing in the window WE WON'T BUILD YOUR WALL. The rogue Twitter accounts from National Parks and White House staff.

And of course the Marches last Saturday. Glorious and heart‑making. i was honored to march with my wife‑husband Vlad and not one but two beautiful mommas: my mom Michele and my brother's soon‑to‑be mother‑in‑law Denise.

i was most moved by the response to the March's counter‑protestors. There were a handful with signs of aborted fetuses and JESUS SAVES.

The response to them was: nothing!

No one shoved them or booed them. They were outnumbered, they were denying themselves access to a glorious dance party. And then after the March seeing the red hat people peacefully co-existing with the pink hat people in the lobby of the Marriott Marquis … that was so glorious to me. There was no angry cross talk. There was nothing to say! 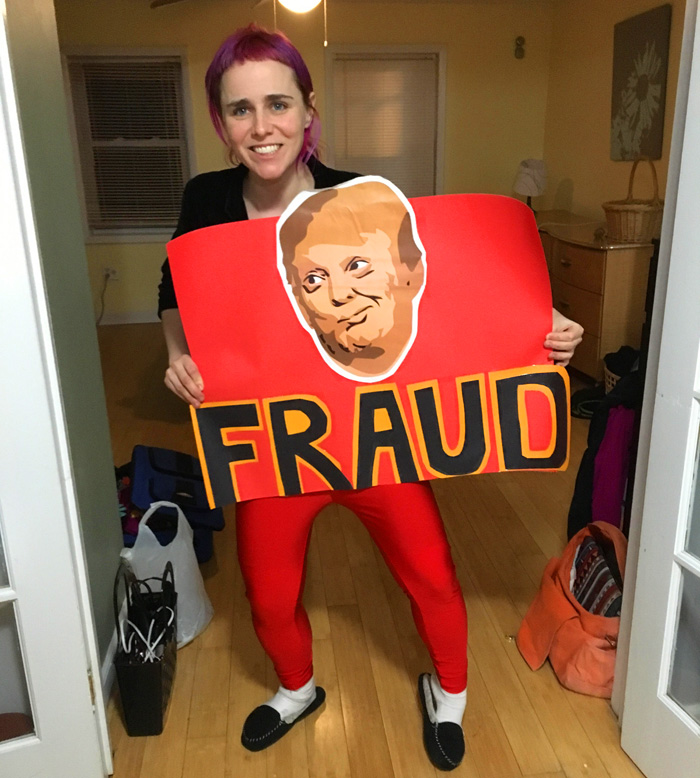 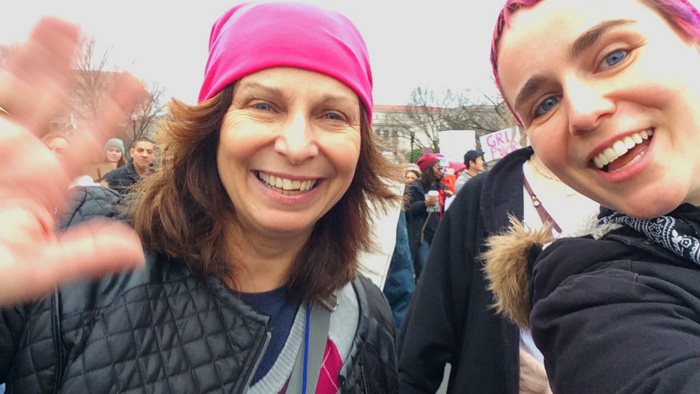 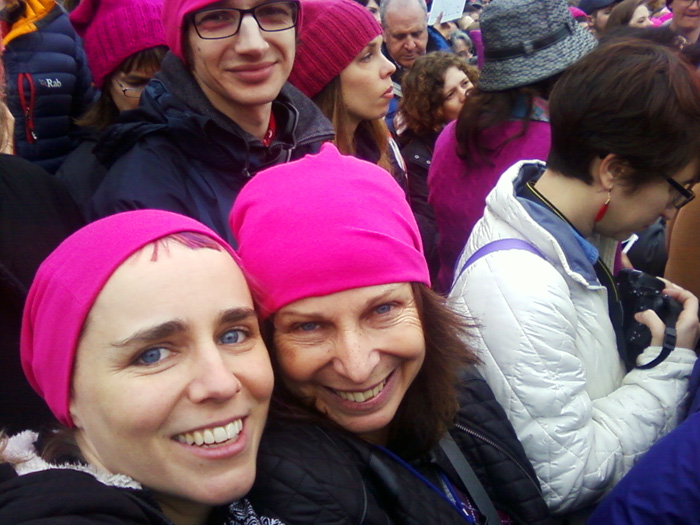 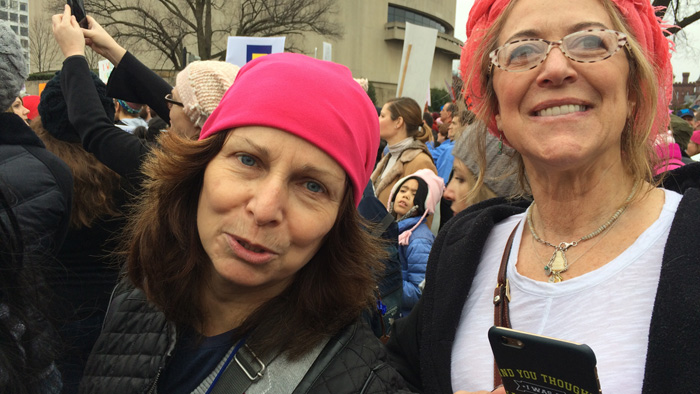 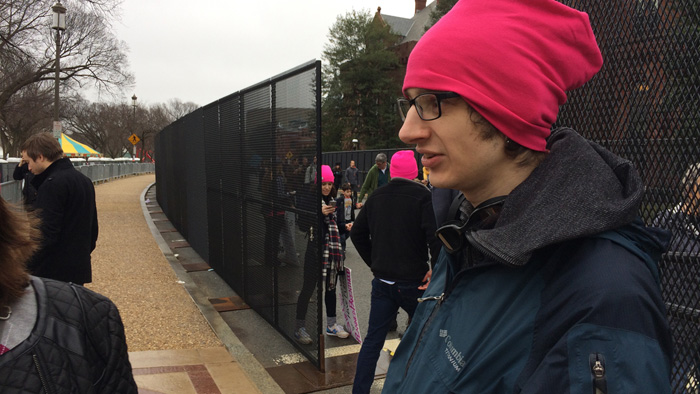 Yesterday i wrote fanmail to one of my favorite childhood authors. Today i'm leaving a video voicemail on Twitter for Dick Durbin because his voice mailbox in DC is full. i signed up for an acting class. i give money to every person on the street who asks, at least for now. i exercise four and five times per week and eat well, even though i really don't wanna, i want to be a puddle.

my co‑producer Tom says in his podcast episode about Cloud Atlas, “if all I am is a drop in a limitless ocean, then the only thing for me to do, the only possible choice in my life is to be the best fucking drop i can be.”

my friend Raph says, “I have mass, and therefore I have gravity, and my gravity pulls on every single mass in the universe. Just as every mass also pulls on me. And no one disputes this! Christians don't even dispute this! But it blows my mind.”

my friend Nikki says, “every drop raises the sea, Dreisbach.”

One hundred percent, yes. Even if all the good of my actions in self‑care and care in my community and supporting artists and making art and kindness and work … even if it's all just (emphatic hand‑waving motions) dust in outer space, that is the only way for me to possibly be.

For a Long Time.

i pretend to think about other things, or sometimes successfully distract myself. But most days for most of the day i'm thinking about what i'm going to do to oppose the incoming administration. And for the same reason, i'm wary of posting political content on the internet.

This time that we're in right now is the time before the reckoning. i know in my bones that blood sacrifice is coming. Whose blood? That, my bones don't know.

my hope for 2017: that he never becomes President.

i'll be using my art and my humor first and foremost as opposition. Humor will be very important in the coming years. It is our patriotic duty to make fun of him and thus exploit his most obvious and vulnerable weakness: vanity.

His ego is a thumbscrew. So stick your thumb in, and screw him.

i'm also looking at practical democratic strategies. The first openly gay Senator, Tammy Baldwin, is up for re'election in Wisconsin in 2018, so i'll probably take the train to Kenosha and do some stumping for her. i want to be an election monitor in Wisconsin or Michigan in 2018 and 2020. If you know how to do that, get in touch!

And my favorite strategy: agitating local representatives. my brother was wary as i described how excited i am to be That Lady at town hall meetings:

“Listen it's very adorable that you're keeping us safe from IKEA shelves but i *literally* Do Not Care even one bit about that. The Only thing i want to hear from you is: what are you doing to oppose the administration. Not what you're going to do, or what other people should do. What you're doing. Any comment? That's my question.”

and out of habit, 2016 recap
Vlad and i took our honeymoon to Los Angeles, Japan, Rome, Romania, and Vienna. We also visited Baltimore, British Columbia, Portland (Oregon), and Vermont. i took a rare solo trip to NYC for the Del Close Improv Marathon, a fun experience but optimal for young people with excellent physical and emotional stamina.

i competed on Jeopardy.
i lead-developed 6 websites.
i posted 8 blog posts to Tacky Harper's Cryptic Clues.
i posted 23 blog posts here.
i wrote 16 new poems.
i put 5 new videos on YouTube.
i performed a lot: headlining poet at The Green Mill again, improv at Second City, reader at The Paper Machete, The Marrow, The Skewer, and Essay Fiesta.
i took another improv class in the spring.
i proposed a Live Anti-Fascist Op-Ed Voicemail segment and signed on as co-producer of The Skewer.

i continued volunteer tutoring at Family Matters in Rogers Park. i love those girls!
i learned the Romanian National anthem.
i learned to like climbing! That was a big one.
i exercised 198 times.
i maintained sobriety and celebrated four years in October.


for reference if you want it   2016 resolutions