note: I'm a bread lover avoiding bread products for a little while. In the scene below: one of us prefers marinara dipping sauce, the other prefers creamy garlic. See if you can guess “who's who”!

I want to be bad and order a pizza.

Ooh yah! Ok if I just eat the cheesy part and leave the bread?

Which kind? Creamy garlic? "The only kind worth getting"?

Right? The pizza is already bread with marinara dipping sauce.

Ugh, those people must just like the taste of bread with tomato sauce. But then: why would they want more of something they like? Right? If you like something, why would you want more of it?

I see where you're going with this, and I'm not having it.

stand up (get up) I did standup at the iO Monday night open mic. Here's audio from the second half (the half I'm less bashful about):

I said it was my first time ever-ever doing standup and the audience and emcee were super supportive. I got some laughs, but left the stage feeling empty. Vlad and Marcel and Colleen were there, and were sweet while I was quiet and muttery the whole ride back. “Well, that happened,” I said.

The next day working from home alone, I fell into a weeping jag. Audible boo-hoo-hoos. Didn't have any words or coherent thoughts behind it, just an extremely raw, exposed feeling. I know what you're thinking, and no, this was also five days post-menstrual. Low tide. So, don't even have hormones (horror moans) to point blame at. Ate some chocolate and watched the entirety of Unbreakable Kimmy Schmidt.

The day after that, I started crafting the entire experience into a comedic monologue to probably be performed at the iO open mic next Monday. So it goes :)

One important thing: from the recording, the laughs were much louder than they seemed from the stage. Tricky tricky. Also explains why so many of the comics would get a strong laugh at a joke, then react like it had been a dud. Don't let the acoustics psych you out, brothers and sisters!

improv For the first time on Wednesday, I slipped into the elusive Zen-like flow state in an improv scene. I've felt it before in music and other performance, but not improv.

The scene was with my improv boyfriend Becca. We were playing two best friends telling a story about the time we saw Rahm Emanuel almost get assassinated. The goal of the game was to be those gross people in a karass built for two. Convey the effect that this was a story we'd told a million times.

I don't remember most of the scene (cf Zen-like flow state). But it took place in a club. A guy came in with a black mask. Pulled off the mask: it was Rahm Emanuel! And we were like, “wutttt!!” And then we're dancin' and we're dancin'! And then the assassins came, but we were like, “Rahm, this way!” because we know the club, right? We can save you, Rahm Emanuel! We took him out the side door, but! There was the assassin! With a gun!

You had to have been there. Here's an artist's re'creation: 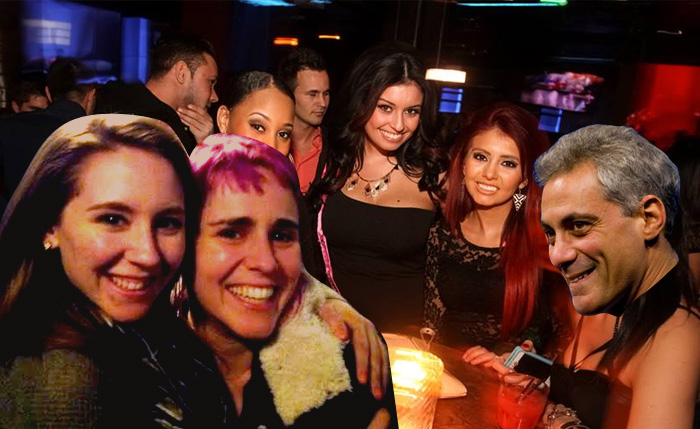 I once explained Morgellons to a friend who got annoyed that Morgellons sufferers are classified as psychotic and “need” to be psychiatrically treated. But from what I've read and what my mom's described with her clients: with a psychosis of that kind, the end game isn't that you have a cute fiber-collecting habit. It's that you've scratched away large portions of your skin and feel self-conscious interacting with others. You lose your job, you isolate and alienate yourself. You stop taking care of yourself.

On You Better Call Saul, Saul's brother (played by glorious Michael “Spinal Tap” McKean) has a serious allergy to electricity. The show presents skepticism about whether the allergy is “real,” but it's unambivalent that the allergy is real to Saul's brother. He feels it. In a way that What About Bob is ambivalent about whether Bob feels it. “Probably not,” says What About Bob.

Encouragingly, Saul's brother works to overcome with his own prescription of exposure therapy. Change is possible.

Which is to say, if this weird health episode was all in my head (ha ha ha) I'm glad that it got better. That whatever it was didn't fester and spiral and get worse and worse. Good news is good news.

brain Saw neurosurgeon Dr Vasiliy on Monday. He contradicted much of what Dr Chef said in December.

Vasiliy didn't know what might be causing my symptoms, but in his opinion and experience it isn't shunt-related. I'm inclined to believe him. And that means ... this is not now nor ever has been a shunt problem ...

... but then so why do I have pain, like, along my shunt tract and where it exits my skull, Docs? Maybe stress, maybe toxic exposure, maybe drugs, maybe physical trauma they say. I'm like, “or maybe the plastic drilled into my brain and neck 20 years ago? Yah? No, not that? You're sure? Because I read on a message board that ... ”

Maybe I've developed hypochondria (terrible medical problem of its own). 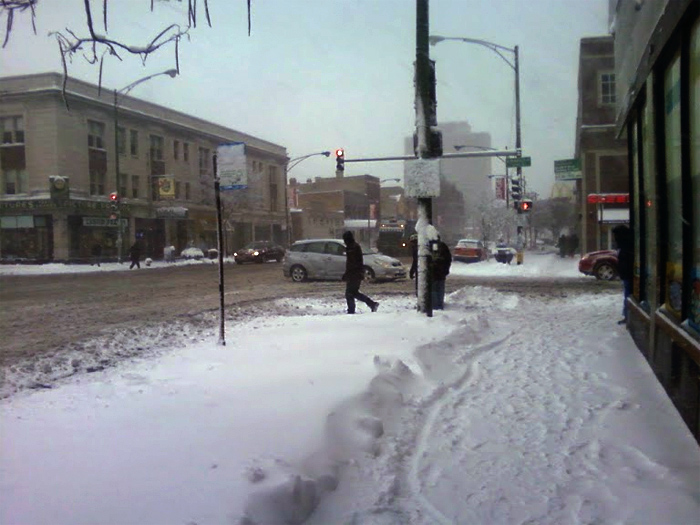 the cab driver I had a cab driver last night who led with a rant about the bike lane added to Broadway on the north side. “There were two lanes for cars, and it used to be fine! And the bicycles were not hurt.” Wasn't sure about that, but the cab driver moved on to What He Would Do If He Were Alderman. “I'd give everyone my cell phone number! Not even when elected, when I was running! And I would say, ‘I am your servant. Call me.’” Being a servant figured big into his alderman fantasy. Also: “and if they did not think I was doing a good job? They could come to my office, spit in my face! Like this! [ptui] Punch me!” It was one of the more bondage-inspired political fantasies I've heard.

I asked him what he'd do about the bed bug problem in Chicago. He hadn't heard about it. I said, “Chicago is the most infested city in the US for three, four years running now? People burn down their buildings, they're so desperate to get rid of them.” Bed bugs and schools were not his aldermanical priorities. Topping the list: plowing the alleys (“I would have my own truck!”); cleaning senior citizens' cars (“Over 60? Call me, I will come.”); delivering meals to people with disabilities.

I asked, “what will you do if you get too many calls?”

He said, “too many calls? Then I would have cameras watching me, all the time. And people could watch their alderman. Their servant! And they would know how hard I was working all the time.”

His wife called. “That was my wife. She wants me to get her a pizza.” He may have muttered something angry about his wife, but I was already chatting happily about how much I love pizza so I caught his tone more than his words. He thanked me at the end of the ride for listening.

youth I've been out every night this week going to poetry events, or going to improv class or shows. Making new young friends. It used to be strange for me to connect as a peer with people younger than my baby brother. Five years younger: that was the old cut-off. Last night I went to a poetry open mic that turned out to be mostly kids from Louder Than a Bomb, which means high school! Half my age. The kids! They're wonderful! They're believers. There's no weariness in their palette. Contemplating my ironic grays in comparison.

improv(e) we're finally doing scene work in improv class. Hardest for me: I'm like playing pretend with a bossy little kid who'll say something, and then say, “now YOU say ...” Also am not a natural listener. The charitable way to frame this is that I'm a writer who wants to “write” the scene. Everyone in the class is wonderful. Not one bad attitude. Everyone is excited, enthusiastic, thoughtful. Everyone goes easy on each other but especially on themselves. I go easier on myself just to fit in. It's awesome. 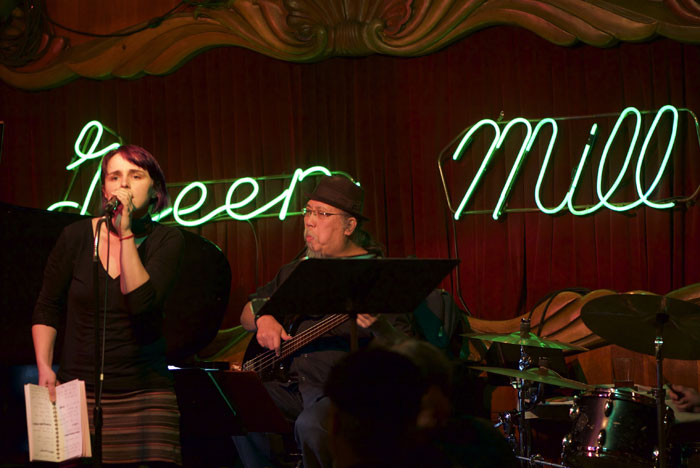 poetry Been keeping to my small still waters of The Green Mill too long. In the last week, feeling woke with the open-hearted beautiful talent in Chicago at Lethal Poetry, The Gala, Urban Sandbox. Mental Graffiti soon. More art (better art). Feeling very far away from the poet I was three years ago. Like: those poems don't read as true anymore. Or they read as a shallower truth. New friend and poetical spirit guide Eka says, “I have that too. But I think I was a shallower person then.”

co-habitation Vlad and I have moved in to the one-bedroom half a block from his apartment and one block from my bed bug-infested old building. We're not quiiiiite living together in the sense that he still has a lease and most of his things at his place down the street, but we are paying rent together and buying furniture together. This is my first time making a season out of furniture shopping. Trying out chairs, talking about what we like in colors and cushion. It's cool. I like it ♥ 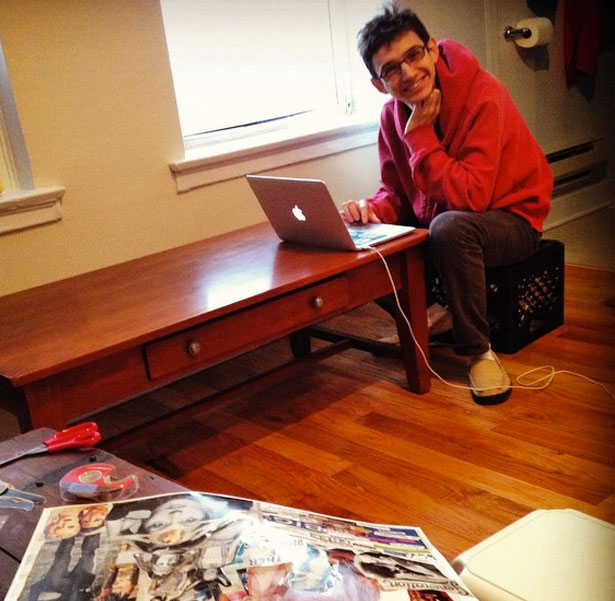