Spent my Friday night with poets in Logan Square. Saw this guy in the snow on my way home: 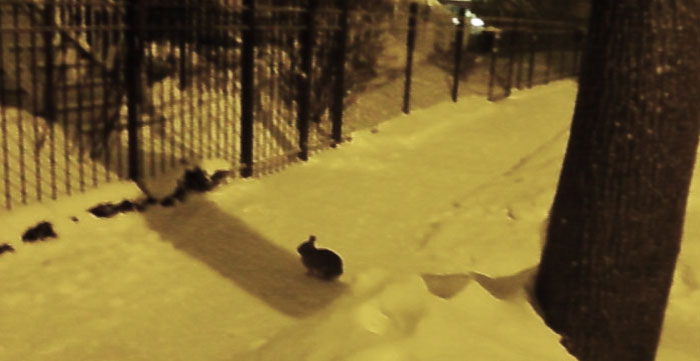 Lotta good things this week. Finished Portfolio 3.0 (secret early preview here, but going live on ericadreisbach.com, like any second now). Had a job interview. Wrote some Mystery/Style slash fan fiction (Nikki's idea), and if you don't know what those things are: fan fiction is when you're a fan and you LOVE a show or a movie or a series or something SO MUCH that there just ISN'T ENOUGH you need to write MORE. Slash fiction is when fan fiction includes homoerotic storylines, generally off-canon. The prototypical example is Kirk/Spock or K/S, pronounced “K slash S,” hence “slash.”*

*and THAT's the factoid that everyone who ever tells you about slash will repeat. By reading, you become one who will recite the telling of this factoid as well. Welcome :)

Mystery and Style are the two protagonists of the autobiographical-ish 2005 bestseller The Game, in which author Neil Strauss (Style) falls in with the pickup artist community in Los Angeles. Pickup artists are dudes who use techniques to seduce women.

Style is a self-identified classic writer-nerd, clocking in at about 5'6" and like 130 lbs. Mystery is a 6'5" magician from Toronto. According to The Game, the two of them tore up Los Angeles in the early 2000s, scoring babes left and right. So many babes. Babes all the time. Contemptible babes, both targets and enemies. Gee, if only babes could be hot, sane, fun, easy ... kinda like, well. Kinda like YOU, Mystery! Style, what are you saying? And why is your hand there???

I read The Game in 2007 and it ruined my ability to feel animal attraction for a couple months. “If it's all just a series of hacks, what's the point???1!” So it was healing to write this. If you want to read the current draft, just email me.