Marriage means more family, and more family means more Christmas presents to assemble. Last year around Thanksgiving my bright idea for holiday gifts that would be personal and thoughtful yet also mass‑produced was to CRAFT a large batch of Christmas presents. i'd noticed the gorgeous batik napkins at MC Larso's house when we visited in November. Batik napkins. Hell yes.

Batik is kinda like tie‑dye, except with designs drawn deliberately with wax rather than created rando'ly by the tie binding.

i found this blogpost about a batik project with kids. They used a gel glue rather than wax. Easier to use, water soluble. Perfect. Plus my hair is DIY gorgeous and saturated. i'm the Dye Master!! i'm the Color Queen!!

Ordered some gel glue and white cotton napkins online, picked up some fabric dye at Michael's, and boom clap ready to go!

i drew designs on 30 napkins with gel glue. Sometimes i went for a recognizable design like “tree” or “Greek key” but mostly they were rando. Not easy to see in this photo but up close with a human eye there are clearish gel glue designs all over these. i went through about one 8 oz bottle of gel glue per fifteen 20"x20" napkins. 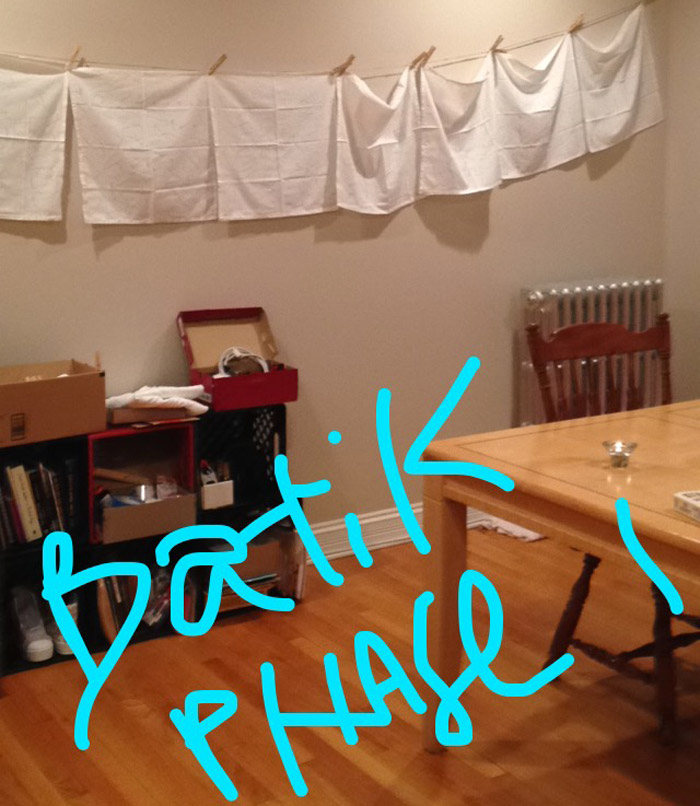 Then the fun part: dye! The fabric dye from Michael's specifically forbade applying dye directly to fabric, but i'm a craft rebel who believes craft rules are meant to be CRAFT BROKEN so i painted that dye directly to the napkins like Craft Patti Smith or Craft Che Guevara. 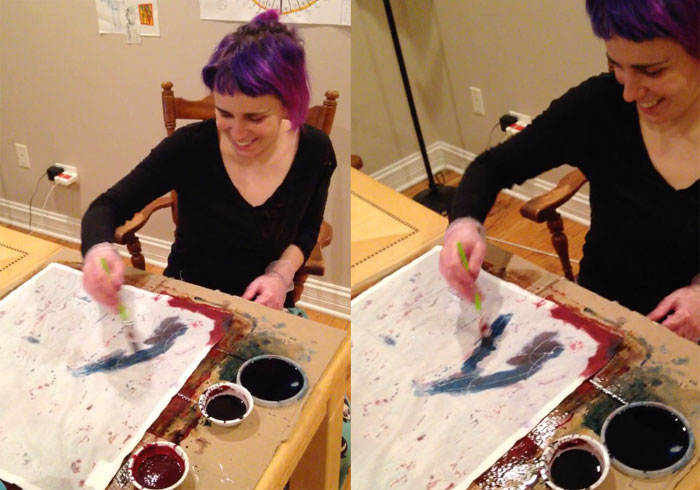 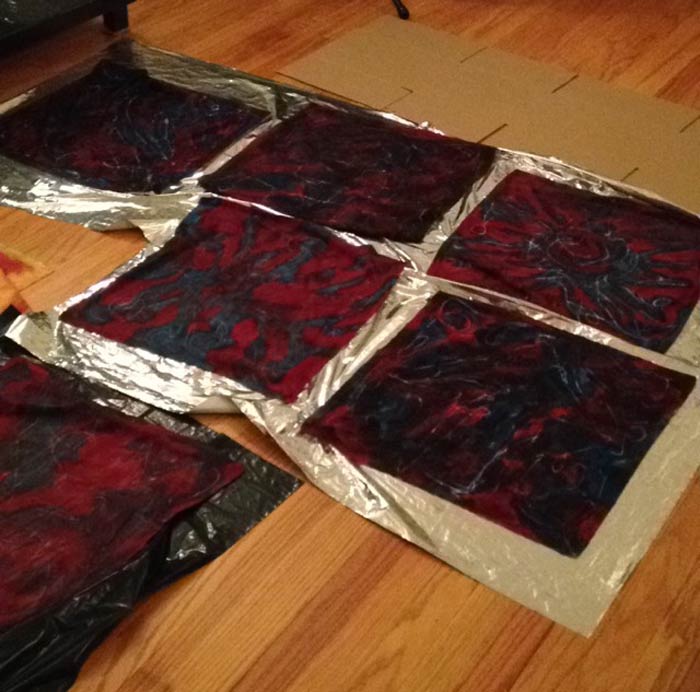 The drying napkins were saturated with gorgeous color, but painting took MUCH more time than i liked. i could only muster the energy to do six per night, and as is the way of the holidaze, Time Was Running Out. Thus, i read the actual instructions on the fabric dye, which said to immerse the fabric for an hour in a boiling mixture of dye and water. If the fabric in question was cotton, add some salt to the water as well.

Ok but so, i feared that boiling would immediately dissolve the gel glue, thus totally negating the point of the batik (don't erase my rando drawings!!). Instead i chose a middle path: i poured some hot salty dilute dye into a plastic tub, then rubbed a set of six napkins around in it until saturated. This worked out pretty well and went much faster than the foolish paint method. Hooray, Christmas was saved! 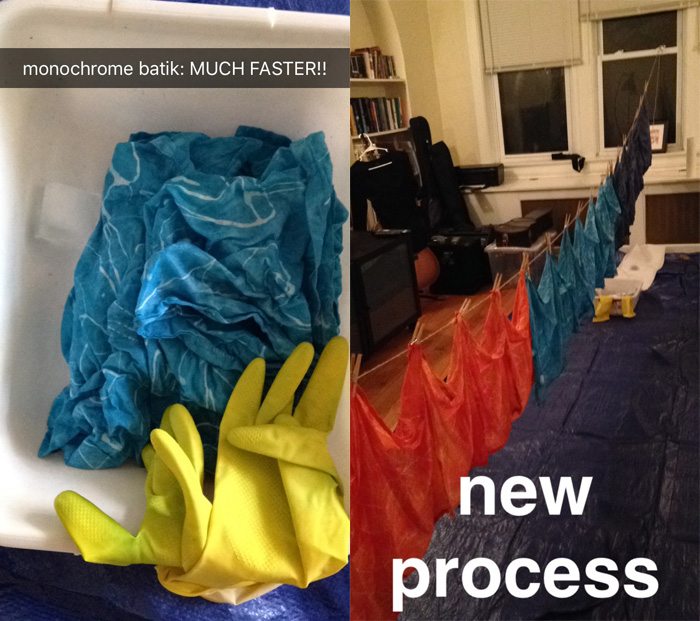 In that kid craft blog post the last step was to wash out the gel glue. But in my case i wanted these napkins to be re'usable and machine washable, which meant assuring to the best of my ability that there would be no dye bleed after normal use and wash. Hm. i rinsed each set of six napkins thoroughly in very hot water, then machine washed and dried them afterward.

The final product was rather pastel. But still heartfelt! Homemade! With some ironing and folding they looked rather nice. 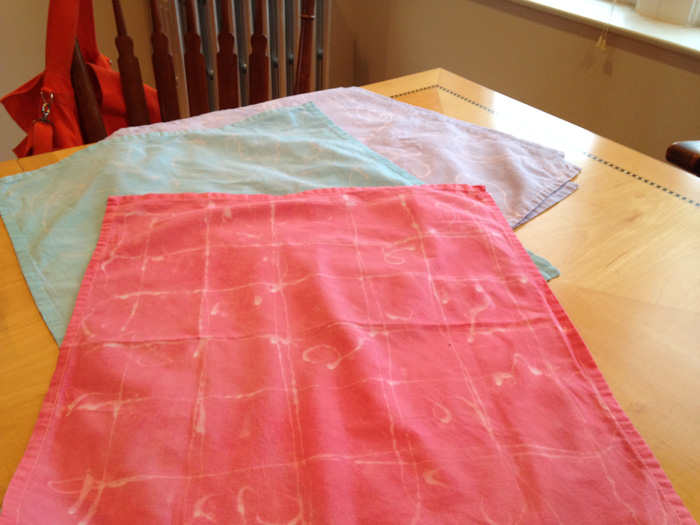 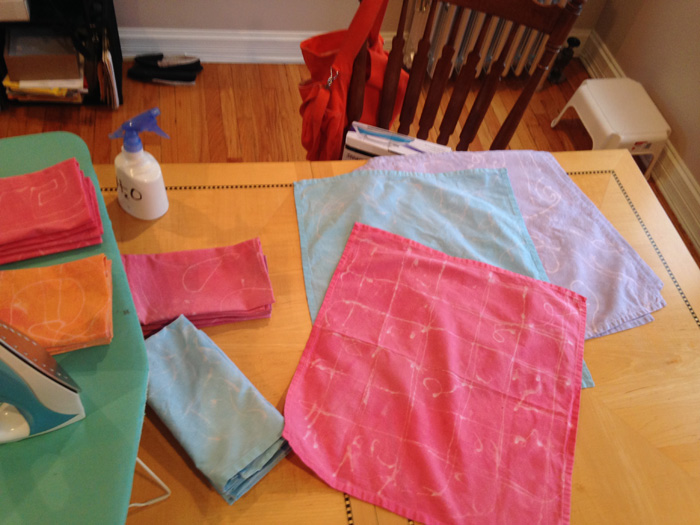 things i might try in the future
i might try real wax like Big Girl Batik style. i might also try good old gel glue boiled on the stove for an hour in salty dilute dye, see what happens.