The year is halfway done! Let's check in with my goals! Am i doing things that i said i wanted to do?

FASHION
Mmmmmmm sometimes! Sometimes maybe! More color. More “looks.” Haha the hard part is that i don't really caaaaare about fashion. But it's fun to try on a new costume (self).

i'm about 10,000 words deep into The Wealth of Peasants. Also produced a picture book with Vlad about Marcel and Colleen as a wedding present: 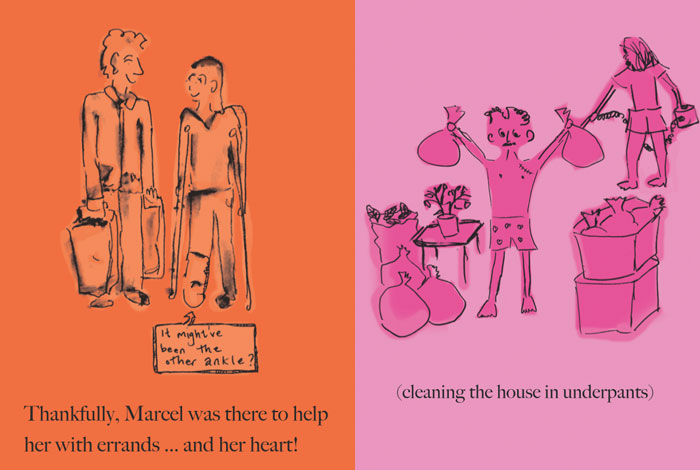 CLASSES AND LESSONS
Finished with Pimsleur's Romanian lessons a couple months ago. Highly recommended! Vlad noticed improvement immediately. He says i now read about as well as a third grader and construct sentences as well as a three‑year‑old. Great news! We spent an hour one night with me reading aloud from this VICE Romania article about the Kafka'n difficulty of securing a national ID card.

i took an improv class with Micah at Second City in the spring. It was great! But the overall experience re'affirmed my feelings about Second City.

If the show takes money from the audience, the show needs to pay the performers.

Exceptions for open mics and for shows that donate proceeds to charity. But no more paying dues. Time to get paid.

COMPUTERS
i've actually attempted many more things on my list than i thought! Ok, computers: i took a Coursera class on web development and got my hands wet with Handlebars. i went to a Ruby on Rails workshop altho didn't get too much top‑level programming skill out of it. In March i worked hard to deliver a Drupal template to impress a potential client, but it ended up being sunk time when they didn't have extra work. Then in May an old client reeled me back in to Wordpress which continues to pay bills, like a sweet fat water buffalo.

TRAVEL
Visited Baltimore in April and New York in June, both providing excellent rejuvenation to body and soul. Later this year there's Canada, LA, Japan, and Romania for sure, and likely a Vermont trip, too. The Bahamas are unlikely, although we're spending a night in Kanazawa which looks like it has some lohvely beaches:

Is Japan running, like, some kind of travel special? Steve and Jed went to Japan, Marcel and Colleen are in Japan right now, Leah and Kyle were just in Japan. Everybody's going to Japan!

A Visit to New York City for the Del Close Improv Marathon.