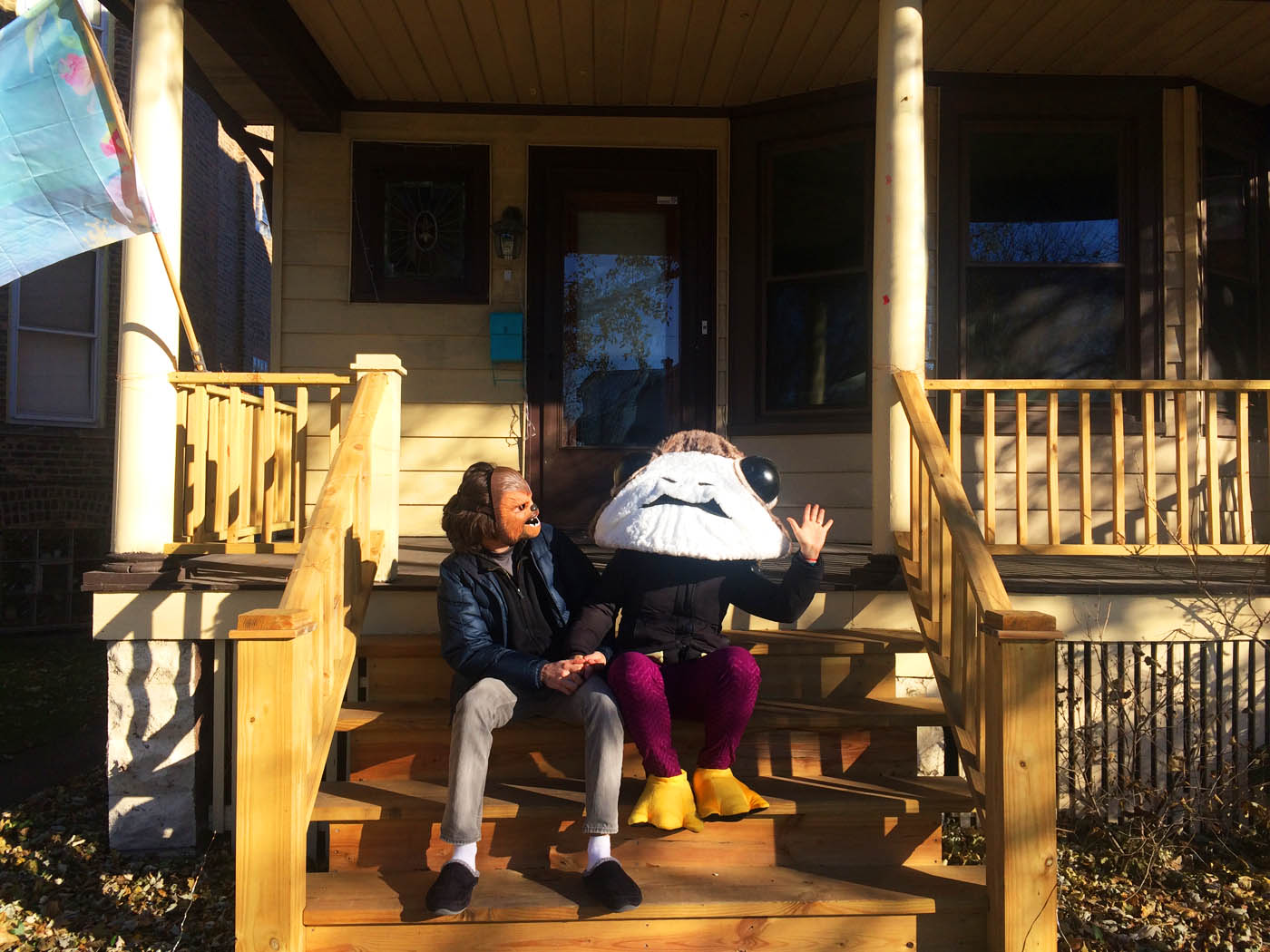 made a dope as hell porg costume 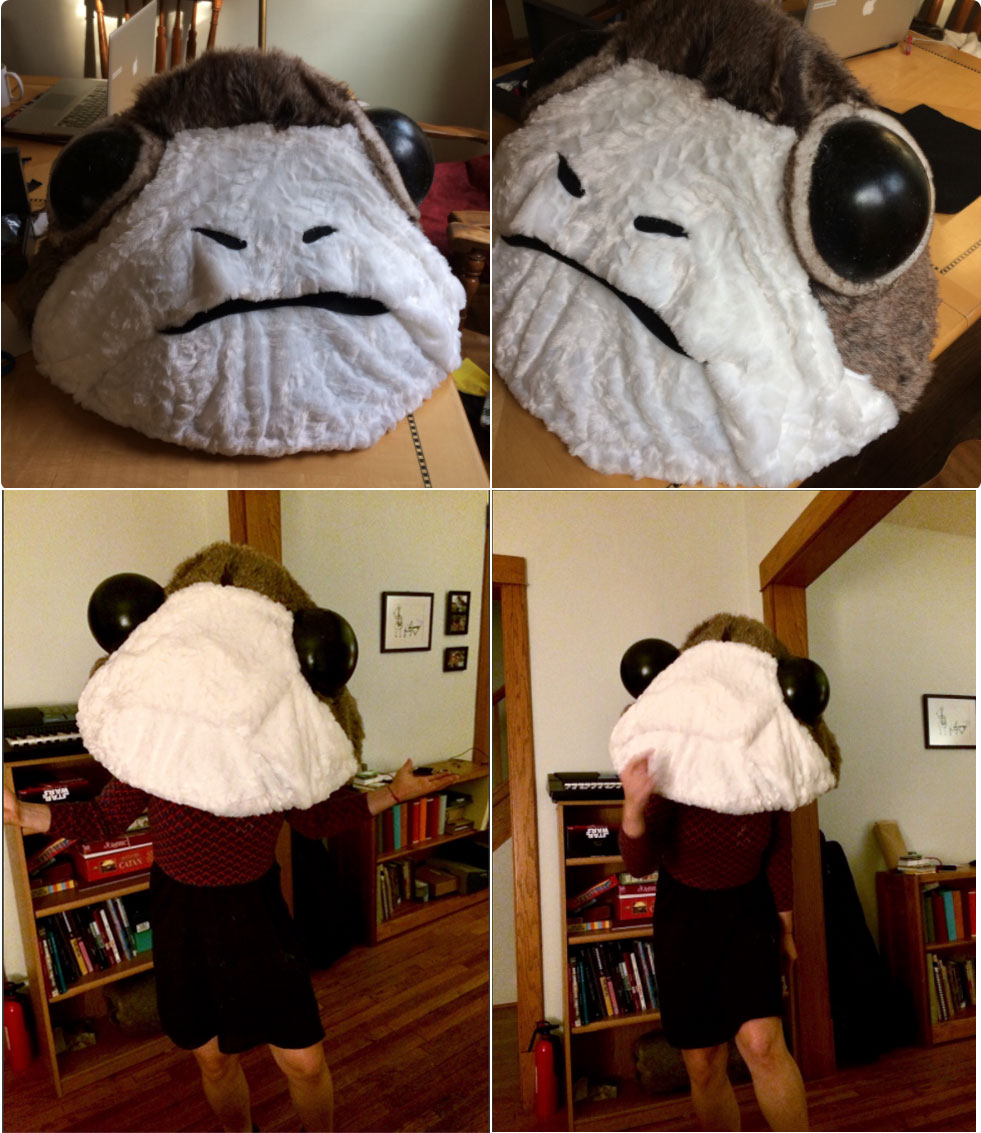 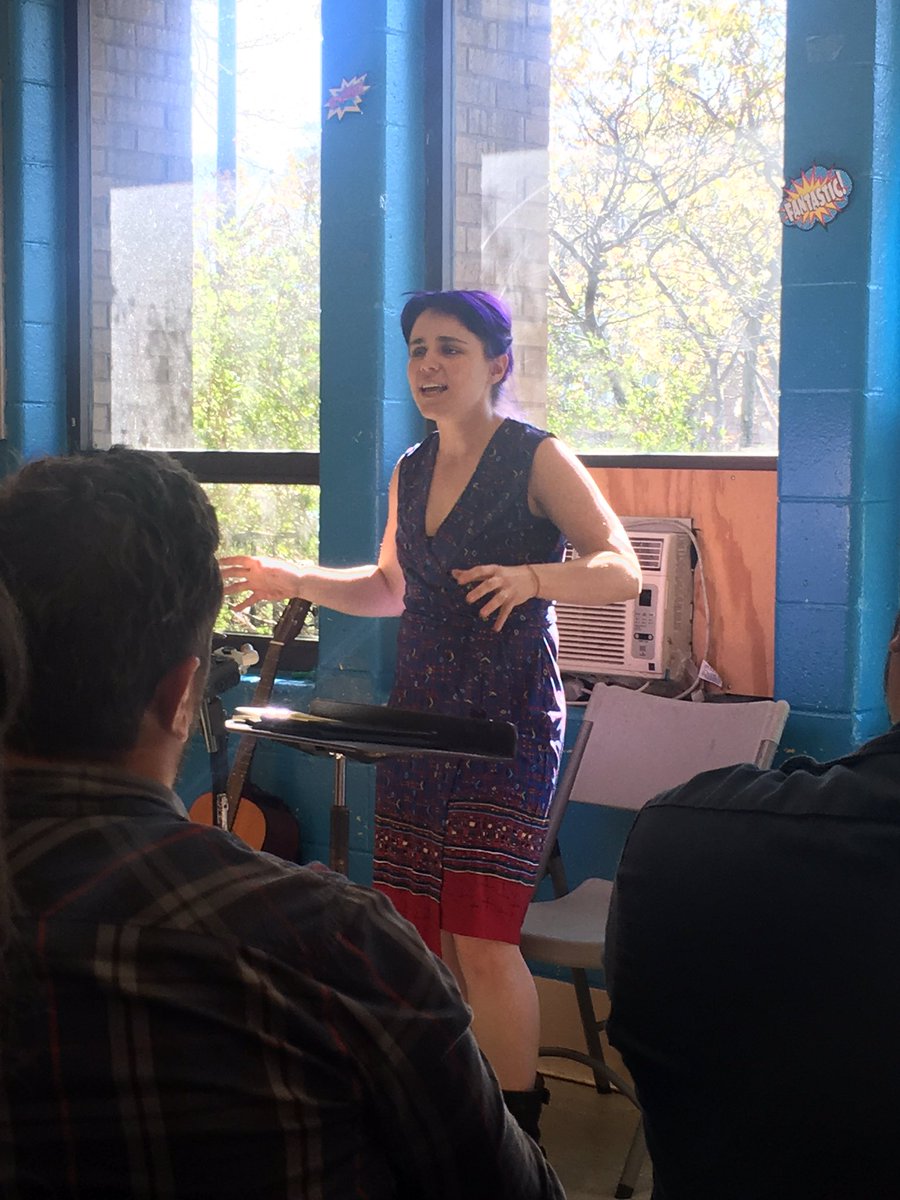 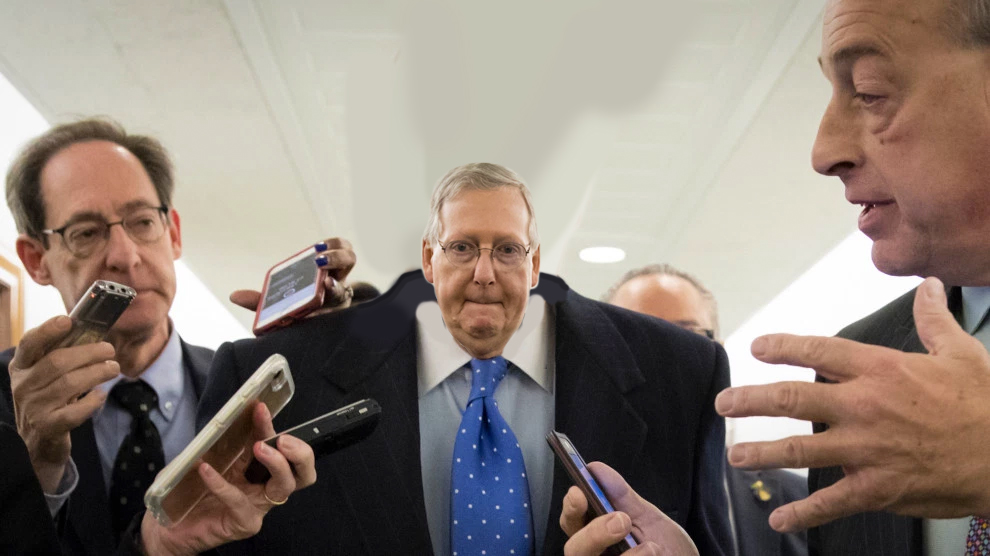 i love jiu jitsu. i started practicing in February, not long after President Dmp threatened to declare martial law in Chicago. Jiu jitsu has put me in the best shape of my life. It's also led to spiritual development. 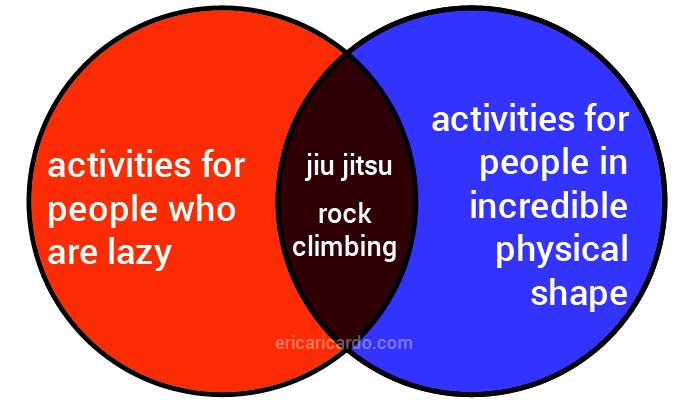 The dojo in Lakeview is a learning environment unlike any other in my experience. Coach Mack and Coach Stefan push students every minute to be better, be stronger — but without encouraging hierarchy or calling out weaknesses, and with a yearslong patience for the process. When i took Tae Kwan Do as a kid we'd go up a belt level every couple weeks. In jiu jitsu, ascending from white belt to blue belt might take three or four years.

i'm lucky; in my non‑jiu jitsu life no one's ever tried to physically overpower me. But i've always wondered, how would i hold up in a physical struggle with the average dude?

The answer is: i would not hold up well! The average dude could take me down easily ... this year. Next year, though. 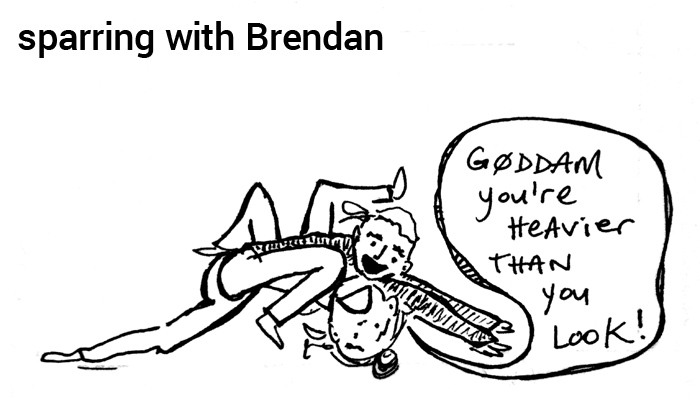 pictured erica has Brendan in side control
caption sparring with Brendan, “g0ddam you're heavier than you look!”

i'm denser and stronger than average for my size, which can lead to surprise and advantage in sparring. i also make jokes. If my opponent laughs then that yields an opening and i can go for a submission, usually a guillotine choke. Laugh, then guillotine: that's my signature move.

Most of the jiu jitsu classes are mixed rank. Experienced blue and purple belts will handicap themselves against me, not in a patronizing way, but more like playing Go with a stone handicap so that every match can be interesting. It'll be, like, letting me pull off a throw so that i can practice technique. Or when i get an imperfect arm bar, encouraging form so that it leads to submission.

It's very generous and non‑adversarial. i'm not used to that! 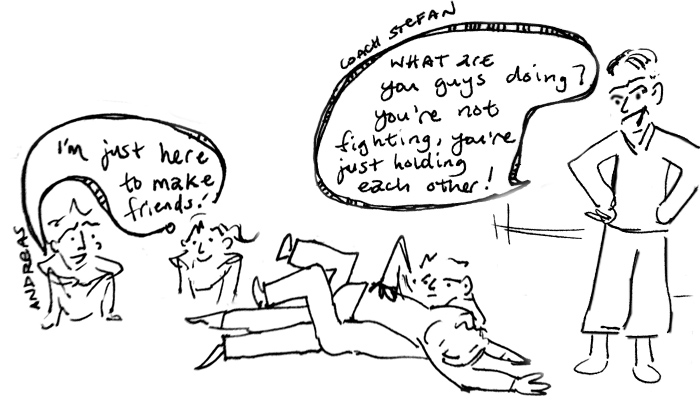 pictured Eduardo and Josh grapple while erica, Andrea, and Coach Stefan look on
caption Coach Stefan: “What are you guys doing? You're not fighting, you're just holding each other!”
Andreas: “I'm just here to make friends.”

Last night there were two new guys in class: brothers, mid‑20s, both about six feet tall and 200 lbs. i sparred with brother Phil and i say now unto you without ego, i say this dryly and objectively, i kicked his ass. It was incredibly satisfying both in seeing how far i've come since February and also just in itself. Come on, big guy. Let's dance.

The first two rounds with Brother Phil he pushed me backwards, which let me wrap my legs around his neck and put him in a triangle. Thissa triangle: 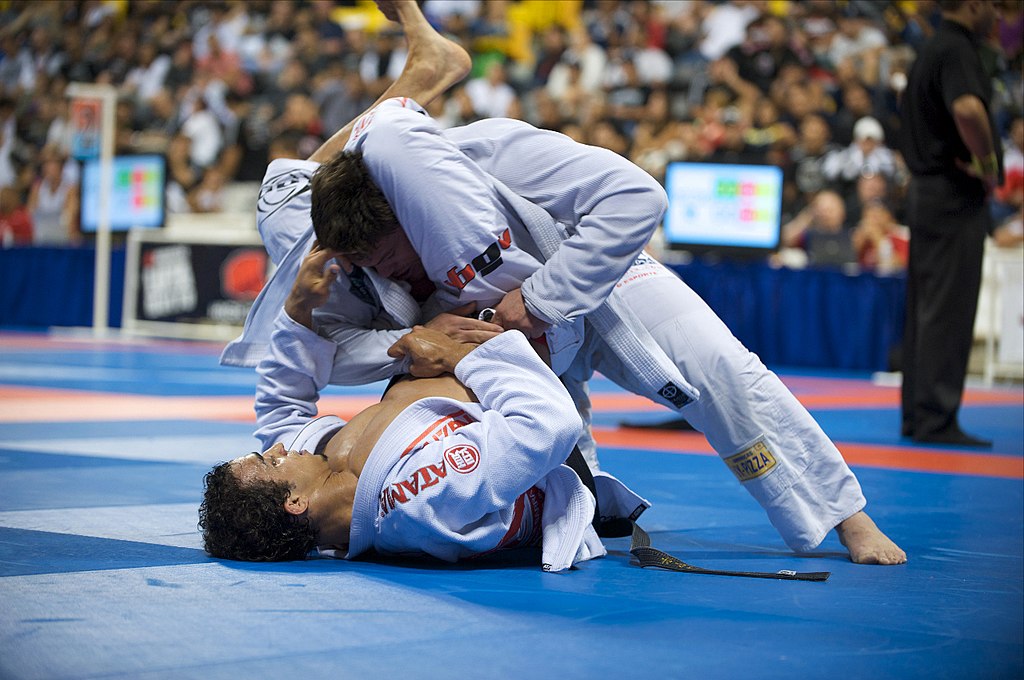 Coach Mack has told me, “your leg is stronger than his arm. So fight him upside down.” i've seen some of the blue and purple belt women flip over and attack with their powerful legs, grabbing and choking like giant squid. i am becoming them.

The third time with Phil he hesitated before reaching out to push me again.

“I know ... now I'm scared,” said Brother Phil. We rolled a bit and i got him into side control and put his left arm into americana, instant submission.

The fourth round i could feel his energy toggle toward aggressive, his socialization to not hurt girls worn down. That led to his fourth time in my triangle and the end of our sparring.

Afterward Phil lay face down on the mat, recuperating. Coach Mack asked, “what did you do?” 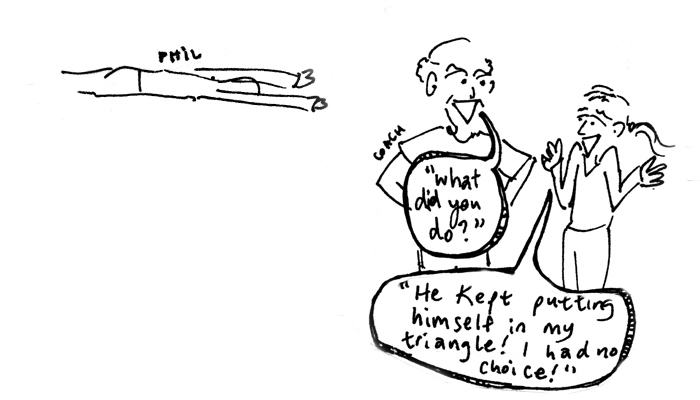 pictured Phil lies prostrate in the background, Coach Mack talks with erica in the foreground

i said, “he kept putting himself in my triangle! i had no choice!”

It wouldn't take many cues from Coach Mack or Coach Stefan to turn the environment toxic. Like to stand over Phil and say, “beaten by a girl, huh?” Or to discourage men and women from sparring. “You don't want to get hurt, do you honey?” But there's none of that shit.

The Coaches would say, yeah of course there's none of that shit. Jiu jitsu is an equalizer. That's what's made them believers. But there are plenty of environments where sex and gender shouldn't matter, and they do, places wet with a steady stream of little soul‑rotting comments and morale disintegrates. So i don't take the equal environment of the dojo for granted. i treasure it.

i'll tell you now about the times i've cried in jiu jitsu
The first time was maybe in March or April sparring with a fellow inexperienced dude, and he put me in a windpipe choke that was unexpectedly brutal. i coughed two guttural and involuntary coughs. “Are you ok?” he asked. i said i was fine. i finished the match. Then i went behind the trash cans and had a little kid cry, the ragged breath sobbing kind where you can't stop yourself or draw smooth breath. i felt raw fear. i assessed whether i could pull myself together enough to come back to the mat to bow at the end of class. Nope. i turned around to put on my coat and Coach Mack saw me.

“i got choked real bad, and i'm freaking out,” i said.

“Who did it? Want me to choke him out?” Coach asked. i said no, it was an accident. Then i went home and cried, then the next week i came back to class and Coach taught us What to Do When You're Choked — how to anticipate it, how to escape it, how to turn it to your advantage. i no longer fear it. Yet another fear shed like a bad old scab.

The second time i cried in jiu jitsu was my first night in Coach Stefan's class. i was working with Beth, one of the excellent purple belts who fights inverted. We were drilling Knee on Belly, which is exactly what it sounds like, and Beth said, “you can put your knee up higher too,” and she put her weight on my solar plexus, and i started crying. Not from pain. It was another fear cry. Altho this time i didn't need to hide behind the garbage can.

Beth told me she's asthmatic and so she used to panic if her face was covered in a match. And Coach Stefan came over to tell me that i'm a “straight warrior, and I would love to have you in my class.”

Even in forfeit, in tears, to be recognized as a fighter. i love jiu jitsu.