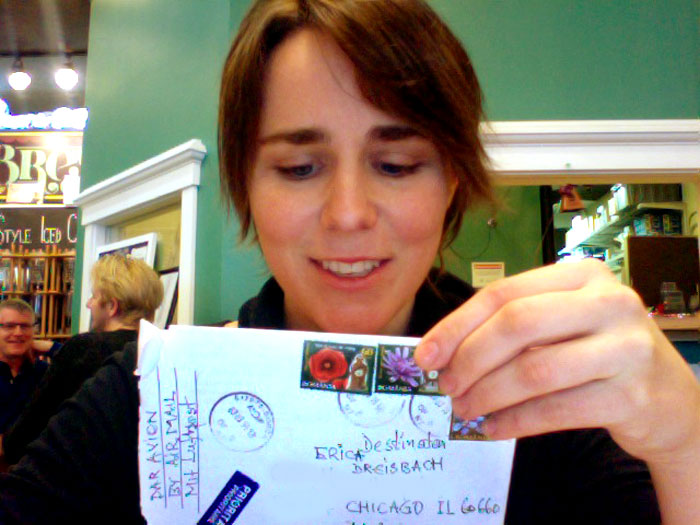 For the last several months I've corresponded with Vlad's grandpa, Tata Mihai (Grandpa Michael). Last fall I complained to Vlad that I love to write letters, but very few people have an appetite for writing back.

I make this complaint a lot, and when I do almost always someone will insist that that's a tragedy. “Give me your snail mail address, Erica. I will write to you,” the someone says courageously. I say ok. This results in one volley, maybe two.

“You know who would *love* to be your penpal? My grandpa,” Vlad said. I sent a first letter to Romania last September, the address on the envelope seeming like a wizard's incantation (even more than usual). Three weeks later, a return letter arrived from Romania. And thus began correspondance with my most enthusiastic penpal to date, the poet Mihai Doroftei.

Tata Mihai does not speak English, and I don't speak Romanian. We both know a smattering of German. So Vlad has had to do all the heavy lifting in translation. But Tata Mihai and I also speak the same language of poetic extroversion.

I'm one of 20 grandchildren on my dad's side, and one of nine on my mom's. My grandfathers have passed away, and my grandmothers, their affection spread thin amongst dozens of cousins, rarely write back. There's been fresh magic for me in adopting Vlad's grandfather as my own. “Ah, so this is what it is!”

Tata Mihai wrote his most recent letter in honor of Mărțișor. The little March. Spring! Life! The butterfly! A season that reminds us: change is possible. “Change is inevitable,” say the Buddhists. Hush, Buddhists. Some of us need to start with possible.