Draft tshirt design for my trivia team, Third Podium. The big tournament is next month. 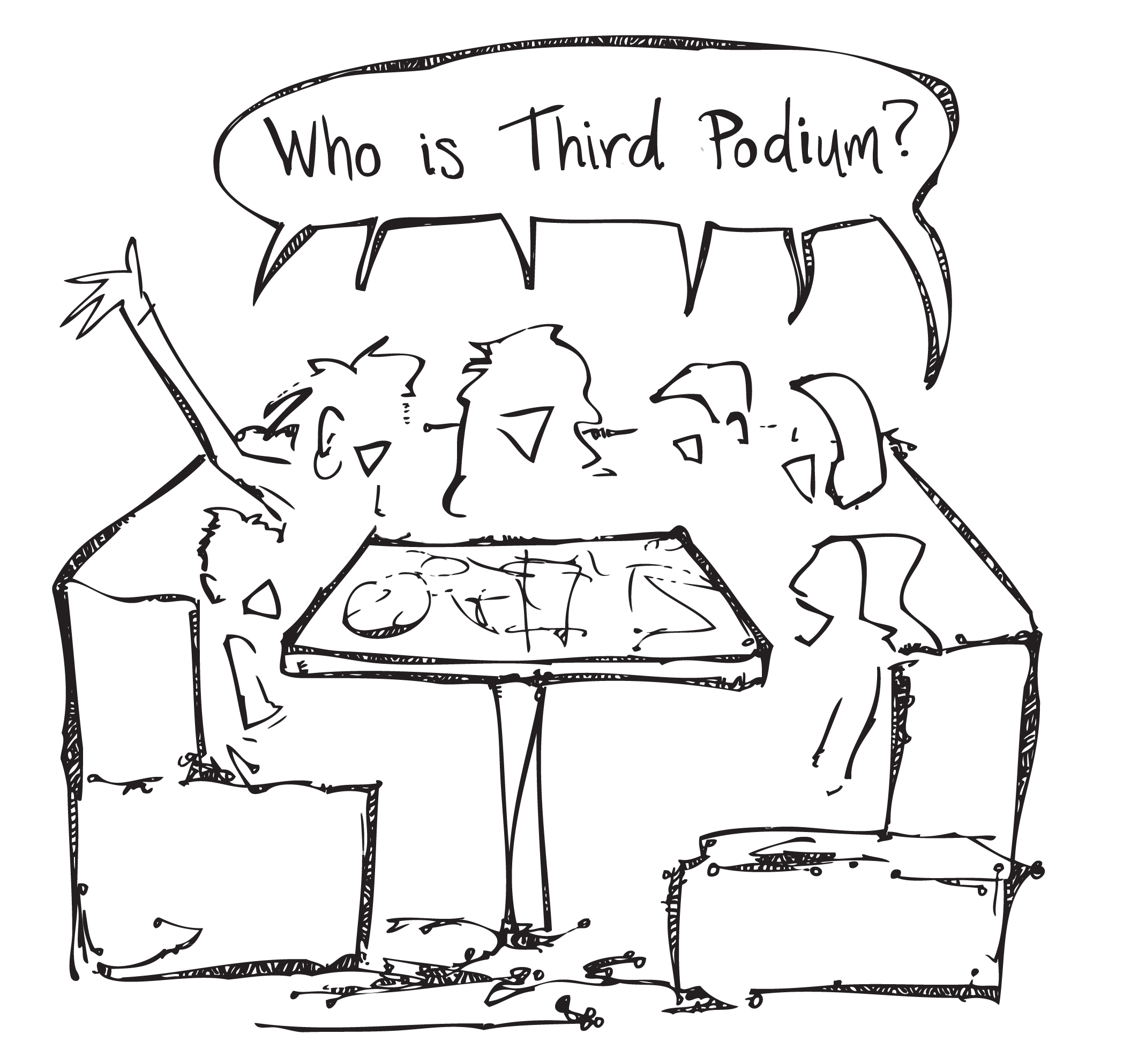 The team is all Jeopardy veterans, and five out of six of us stood at the third podium. It is very fun to play with smart women who aren't bashful about being smart.

Today as i was leaving jiu jitsu class Coach Mack noticed the Rubik's cube in my hand. “Do you always carry one of those around?” he asked.

“i like people to know that i'm smart,” i said. And i wish i wish, oh how i wish, i wish i could give you a jpeg of the smile that Coach gave me. It was a smile like a hug to an overwhelmed child, like “c'mere you!” It was a smile like my jiu jitsu style suddenly made more sense to him. At least, that's how i saw it.

“What's your record?” Ben asked, like in that “what kind of guitar is that?” way.

health
The legislation in the Senate is a nightmare. i'm frustrated at the possibility of another narrow loss. i'm tired of narrow losses treated as mandates for psychos. The narrow loss in the November election. The narrow loss the other day in Georgia.

i'm tired of these decisions between “cake? or death?” and people who decide for everyone in the country choose death. i want a win. i want my anger and fear to help. Though it's my short polite calls to Congress, if anything, that help.

But maybe not. Maybe my anger and relentless collection of articles and data do help. Obstinance is strong jiu jitsu.

Bitch is a Life. 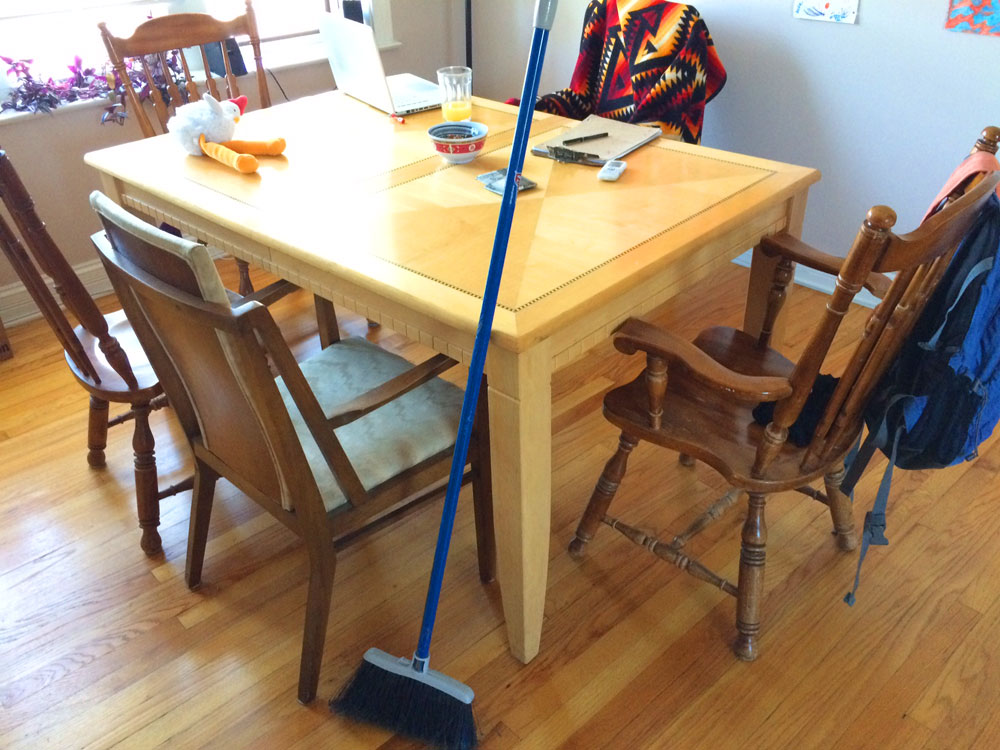 See these scratches on the broom, like the claw marks of a wild animal, or of a typhoidal nursemaid buried alive in folk legend? 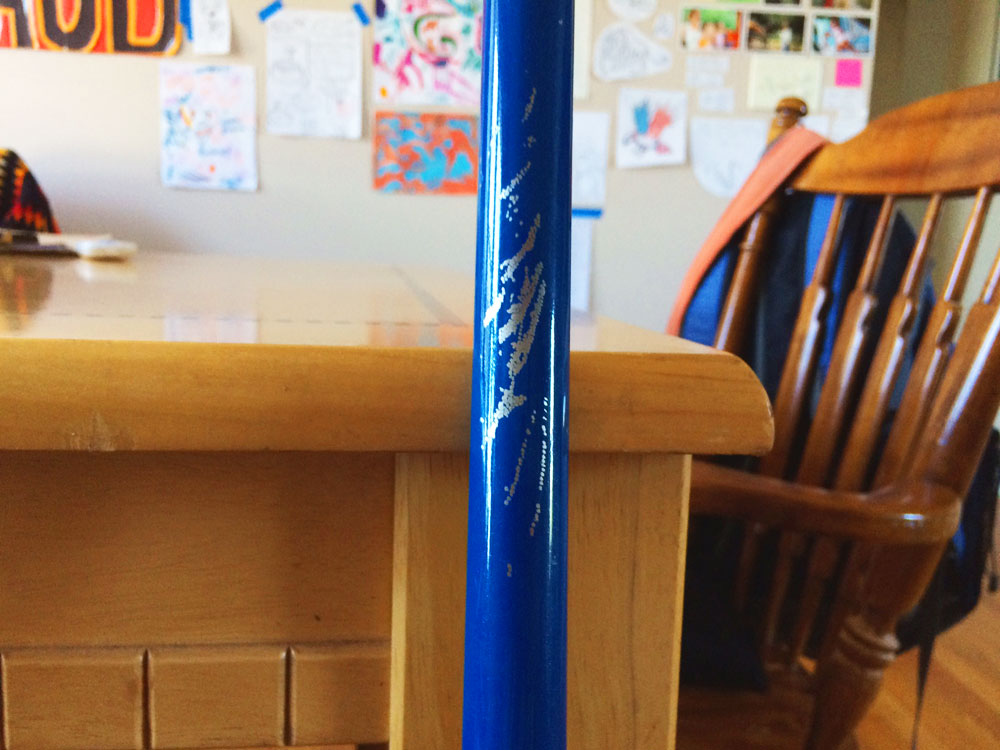 You know how those scratches got there?

i'm oft a zealous sweeper. i've broken brooms. How many, i do not know. Fewer than ten. More than one. Probably around three. And i will break again. Lately i've been self‑identifying as a witch. Breaking brooms in due household course is a very witchy thing to do.

beach
Two Saturdays in a row i've been to the beach with a big bag of cherries. Two pounds is now the serving size of cherries. i eat them all and have wretched cleansing poos the next day. 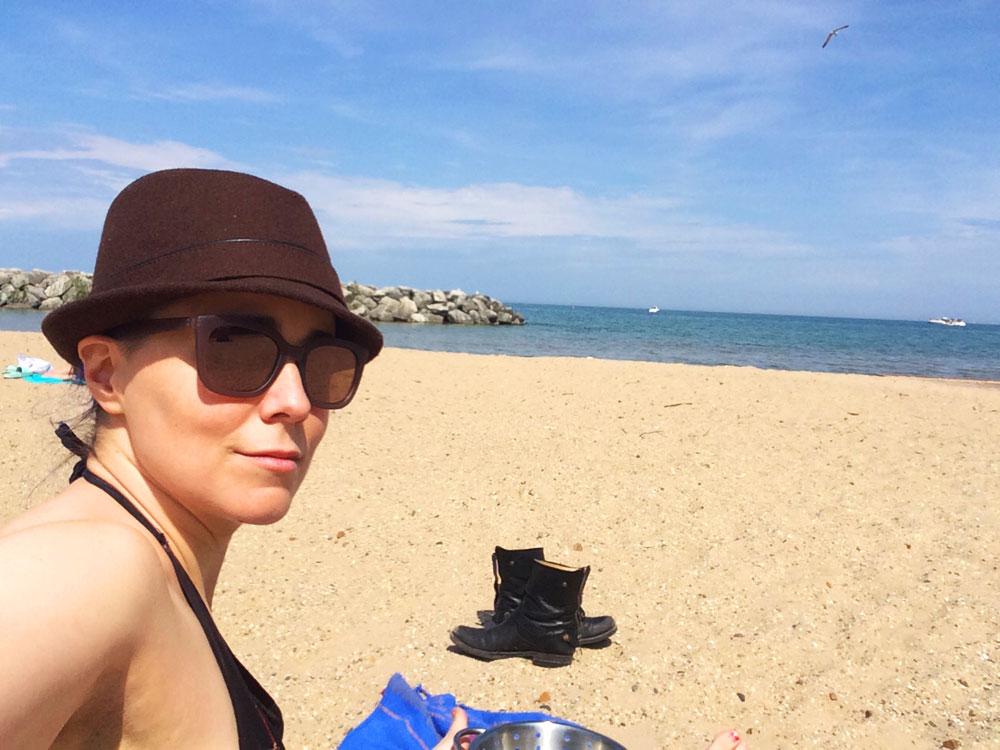 Last week i stayed for four hours letting the sun do its good work to me but today it's hot and windy and sand kept blasting over me and the cherries. Plus there was a family of pale brutes throwing each other into the cold lake, yelling in identical husky tenors, taunting, casually littering. So i left after an hour and now i'm home computing while Vlad takes a sunshine nap in our hottest room. my lizard kitten wife!

classic
i like to make giant plates of fresh food. i invented them as a special period treat and call them “Classic Menstruation Plates.” 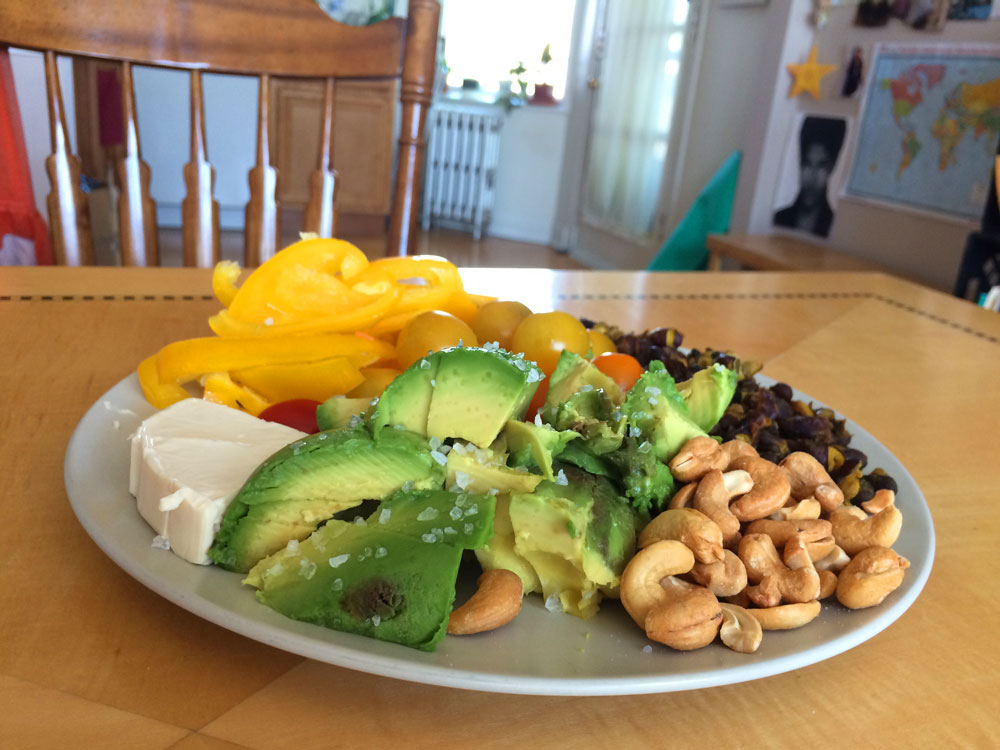 it's ok to write a blog post with no point
If you're waiting for a point, none's coming.

diary
Comey's memos have gotten me back into daily diary writing. Paper trail. Written record. Tho what i really want is a one‑touch video recorder: something i don't have to boot up or unlock, just hit the button and camera rolls.

There's a guy at the local gym whom i secretly call Big Tiffany because he irritates me and i think he would be insulted by a girly name rather than honored. He's maybe 6'6" and 240 lbs and muscular, white with a sharp little Nazi haircut. Maybe in his 30s? He likes to blast hard music on his headphones and whale on the punching bags in the gym classroom. The classroom space is available to all gym members apart from scheduled class times.

Twice i've seen him pick a bad fight before a Zumba class. The first time was last October. Big Tiffany was whaling on the bags before the 5:45pm class. A sign on the door said that classes may need up to 15 minutes for set up, and gym members should manage their schedules and expectations accordingly.

Ok switching to storytelling present tense: so it's 5:40pm on a Wednesday last October and the gentle people of Zumba are lining up early in the classroom, and B Tiffany's whaling away on the bags, and the teacher, M, makes a comment about his aggression, and then asks him to leave, invoking the 15 minute rule from the sign on the door. Ohhhhh Big Tiffany is not havin it. Big Tiffany says that Zumba class doesn't have any equipment to set up, so why should he have to leave? Big Tiffany gets up in M's face and it is an intense scene. M is about 5'3" and 120 lbs, he towers above her, she stands her ground, calls him pathetic, he snorts and leaves.

And then the manager China comes into the classroom. China is her boxing name, or her wrestling name? It's her stage name; the world is a stage and seeing her body makes an audience of you. Anyway Big Tiffany, despite the handicap of his shitty personality, is a decent authority whisperer. He must be. Because China is fully on Big Tiffany's side. So then China and M get into it. And M cites the sign on the door and the 15 minutes rule. And China asks, “did you insult him?” and M said, “no!” and that's when i left, because i'd personally seen and heard M call B Tiffany “pathetic” and the situation stressed me out.

And then i avoided that particular class for a good four months. i didn't want to risk seeing another rematch! i was disappointed in M. Except then i saw Big Tiffany pick the exact same fight a second time: this time on a Sunday morning at 9am. This was S's ultra‑popular 9:45am class. People save their spots a full hour in advance for S's class. People will set out a water bottle or a hat and go downstairs to slow‑pedal a recumbent bike for an hour.

So it's 45 minutes before class and the room is already three or four rows deep with saved spots, and who's there? You guessed it, Big Tiffany, once again in a Classic Big Tiffany workout routine of aggressively smashing at a punching bag, headphones blasting. K and N, a heterosexual couple who frequent the Sunday morning class, have figured out how to use the room speakers with K's ipod. So to pass the time before class starts, they're doing a couple Zumba routines.

This irritates B Tiffany, who then proceeds to aggressively get in K's face about respecting his workout. His words. “Respect my workout.” He has perfect intuition for picking out the woman half his size who'll fight him, because K gets right in his face while her gentle partner N watches.

So Big Tiffany exits the classroom, and the same authority whispering takes place off stage, because the weekend manager T comes in and we're on to Act Two, and now K is yelling at T, and T is threatening to revoke K's gym membership, and K yells, “you're gonna want to talk to your manager first!” and T, frustrated, “I am the manager.” T is also an exceptionally friendly and kind person, seeing him pushed this far is abominable, this is when i get stressed out and leave.

Also playing out in these two pageants: managers T and China present as black, K and teacher M present as white, and watching them yell at management rather than calmly ally themselves ... makes me sad. And baffled.

Do i think M and K would have been more calm and respectful toward white managers? Yes. But that's just what i think. Who can know.

As is, even though i've kept daily exercise logs for the last five years, it was difficult to pinpoint dates for these incidents when i tried the other week. Thus, the diary. Come for me, Big Tiffany. Stronger men than you fear me. Smarter men wish they never got near me.