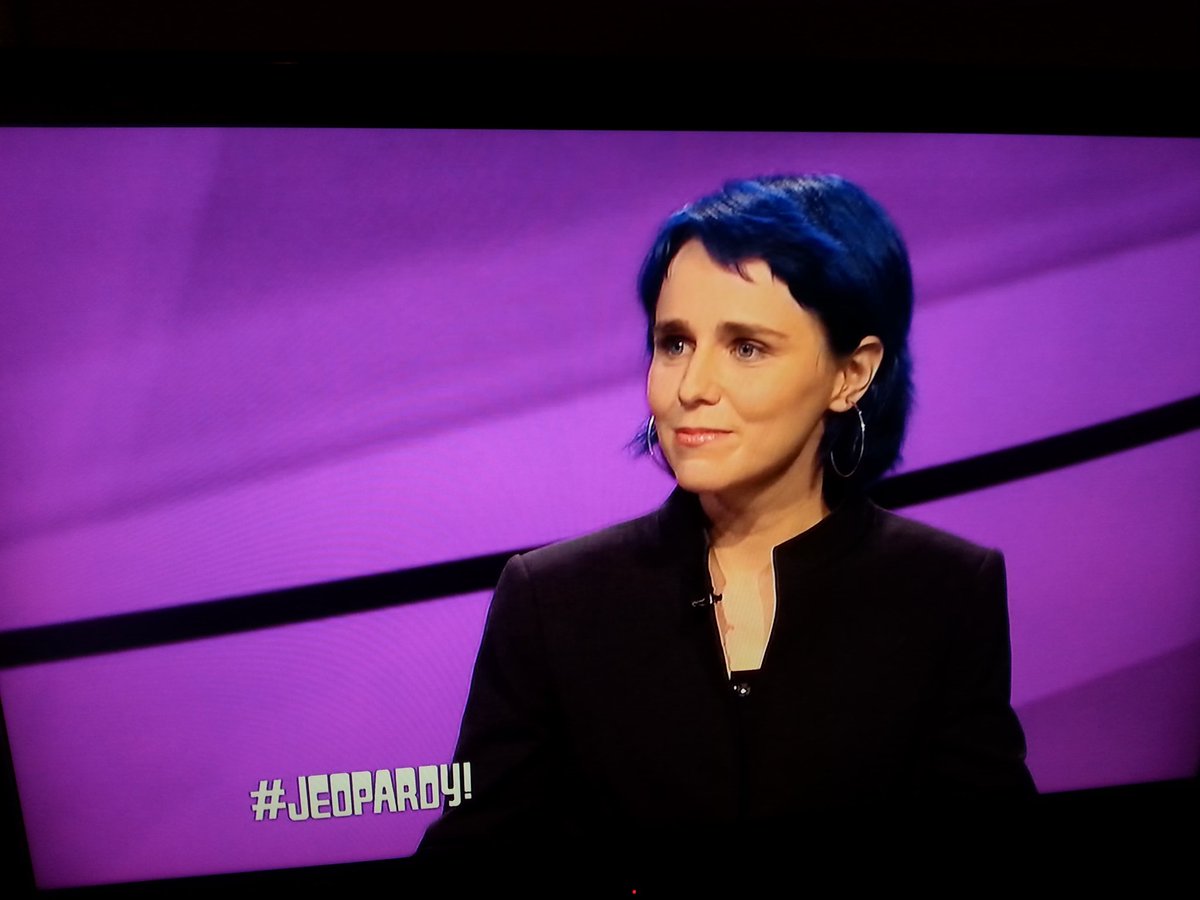 As in prior posts about the show, i write it Jeopardy, without quotes, itals, or the terminal exclamation point. No disrespect. i tried writing it the proper way and the text was very hard to read coherently and i was like, frunk it, this my blog. And also, nobody's gonne be confused what show i'm talking about.

“Oh I assumed you meant some knock‑off version. Because you know it's Jeopardy!, right?”
[ i respond with a seven minute fart ]

It took a long time, and a lot of effort, to learn how i would do on Jeopardy. Turns out: not that great! ARGH!

So the game is three things: the material, the buzzer, and sheer luck. i focused solely on the material figuring that the other two were out of my hands. Knowing what i know now and if i could turn back time, i would call up any of the many local universities and colleges and ask to sit in with their quiz bowl teams to get live buzzer practice under pressure. Ken Jennings was a quiz bowl guy. Seth Wilson was a quiz bowl guy. i coulda hung with the quiz bowl guys for real time quiz mastery.

the buzzer sucks  Every thing that you've heard about the buzzer sucking is true. The buzzer sucks. Unless you're one of the savants who achieves early expertise. There's a quarter second lockout penalty for ringing in early. The producers have access to a console that tells them if and who buzzed early, but the players never know if they buzzed early or if another player just buzzed faster. Thus it's super difficult to calibrate your buzzer style if you're naturally buzz dumb. It also radically increases the incumbent advantage.

unsolicited suggestion  i propose adding a small light behind each player podium that indicates an early buzz. Maybe adding real time feedback would be too distracting in the game? So maybe the early buzz indicator could be just for the off‑air practice rounds.

Or maybe it's to the show's benefit to cultivate an incumbent advantage. Maybe players on hot streaks make for more compelling television.

emotions  i was severely bummed out to lose. i had prepared every day for a year. One year. Every morning in the kitchen. Every night with a trivia almanac in bed. Running through several games a week. On game day, i didn't choke. i was straight up outplayed. AhhhHHhhhhHaha i still can't quite accept it??!?!

And then it was tough from July to September to have to keep the secret from so many wonderful friends. Vlad and i traveled around the world in August on our late-honeymoon-slash-one-year-anniversary. That took the edge off. And watching the actual show yesterday, surprisingly, took the edge off — actually getting to see how i performed with an outside eye, rather than rely on my own corrupt and unreliable memory.

update 5 oct 2016  startregy  From reading many J!Archive games, i could see that the worst thing for a player is to get nervous and take wild stabs at big money clues. Players who win on Jeopardy answer one or two clues wrong; players who lose on Jeopardy answer four or five clues wrong. So i practiced staying silent for clues i didn't know, and paid close attention to when my intuition told me i was correct, or also to when i knew that i knew the answer and just needed a few seconds to pull it out.

But as Mike Tyson said: everybody has a plan, until they get punched in the face. i answered four clues wrong, plus final Jeopardy. Buh! 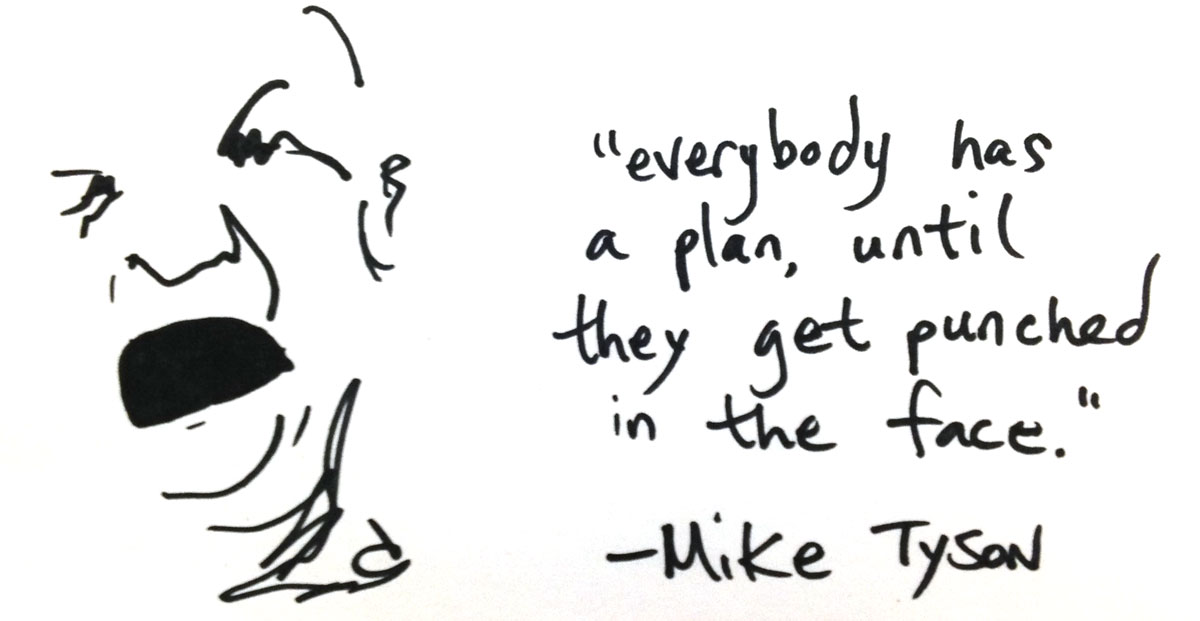 Of course, one of those wrong answers was KANGAROOT. Legendary. So :) 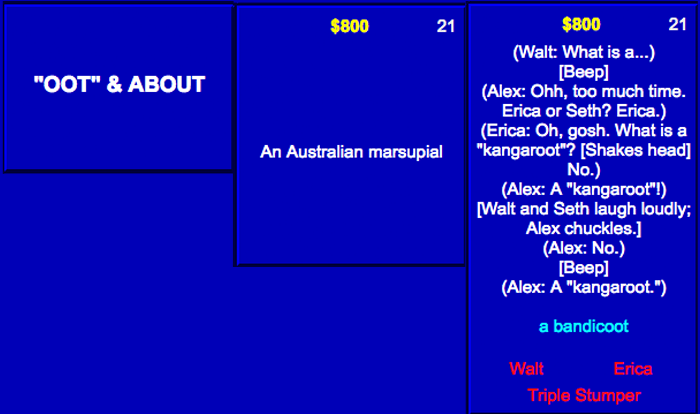 the children  i volunteer tutor Tuesdays in Rogers Park. You don't know S, but she's this very cool and brilliant but also aloof 11‑year‑old. i know sometimes she's having an awesome time in our tutoring sessions, and sometimes she's bored and just being patient, but it's almost impossible for me to tell which is which. S keeps it tight.

So this is me with her the other afternoon:

me: “Do you know Jeopardy?”

… and the look on her face when it cycles to me!

Her jaw drops! Like Halley's comet: something you see once in your lifetime, maybe if you're super lucky you see it twice. 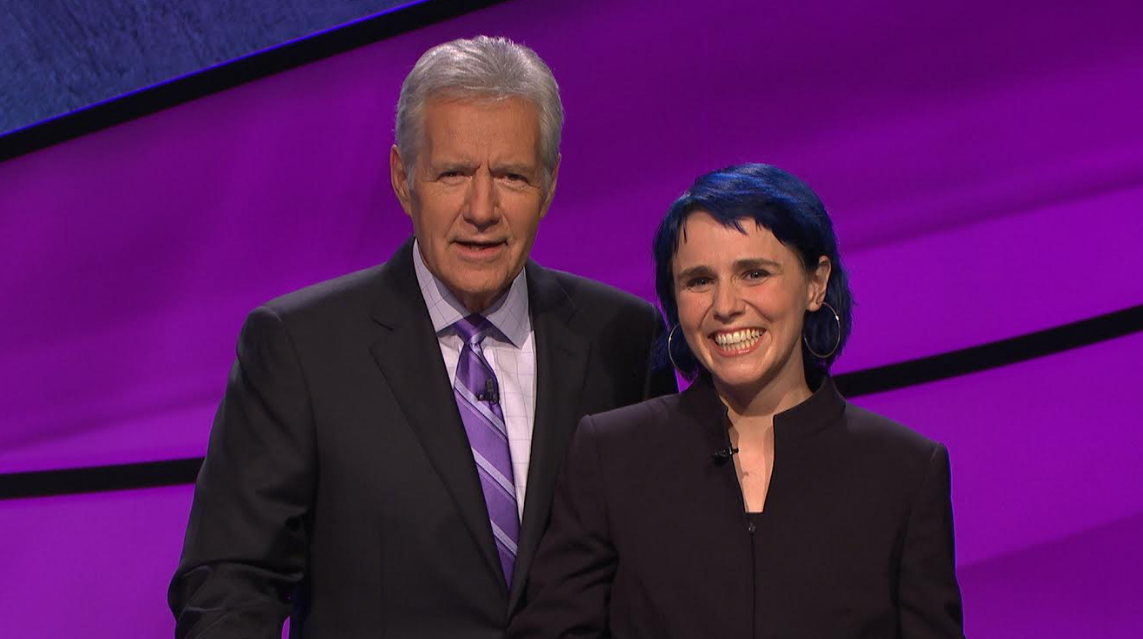 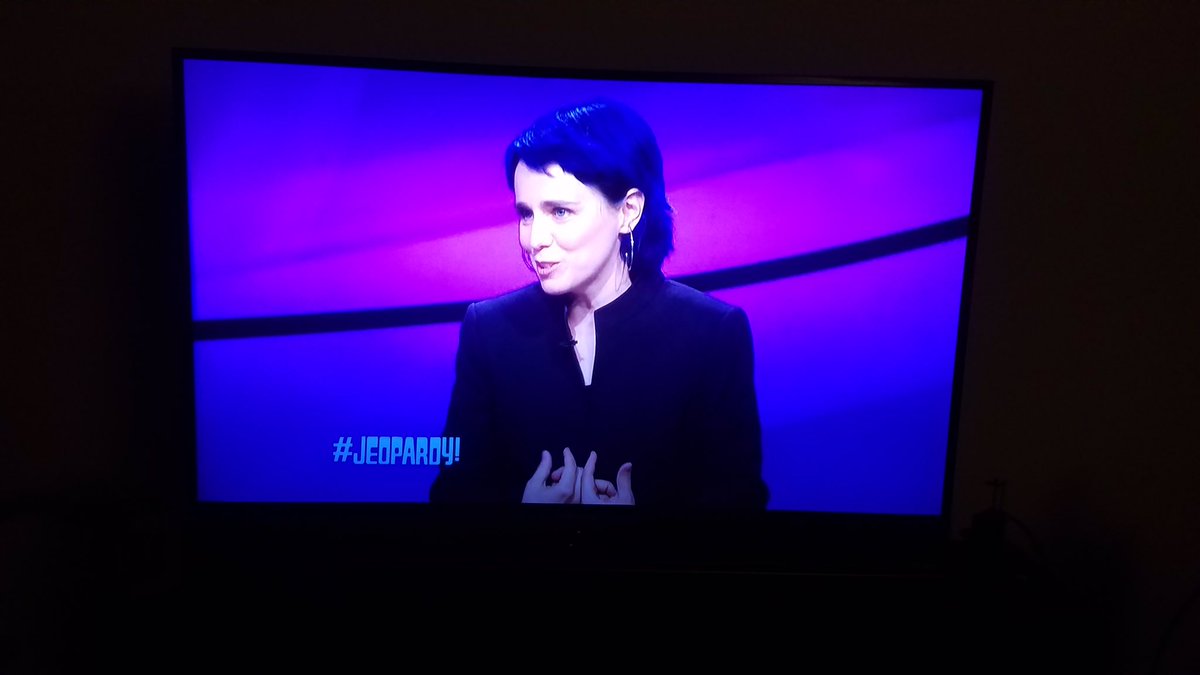 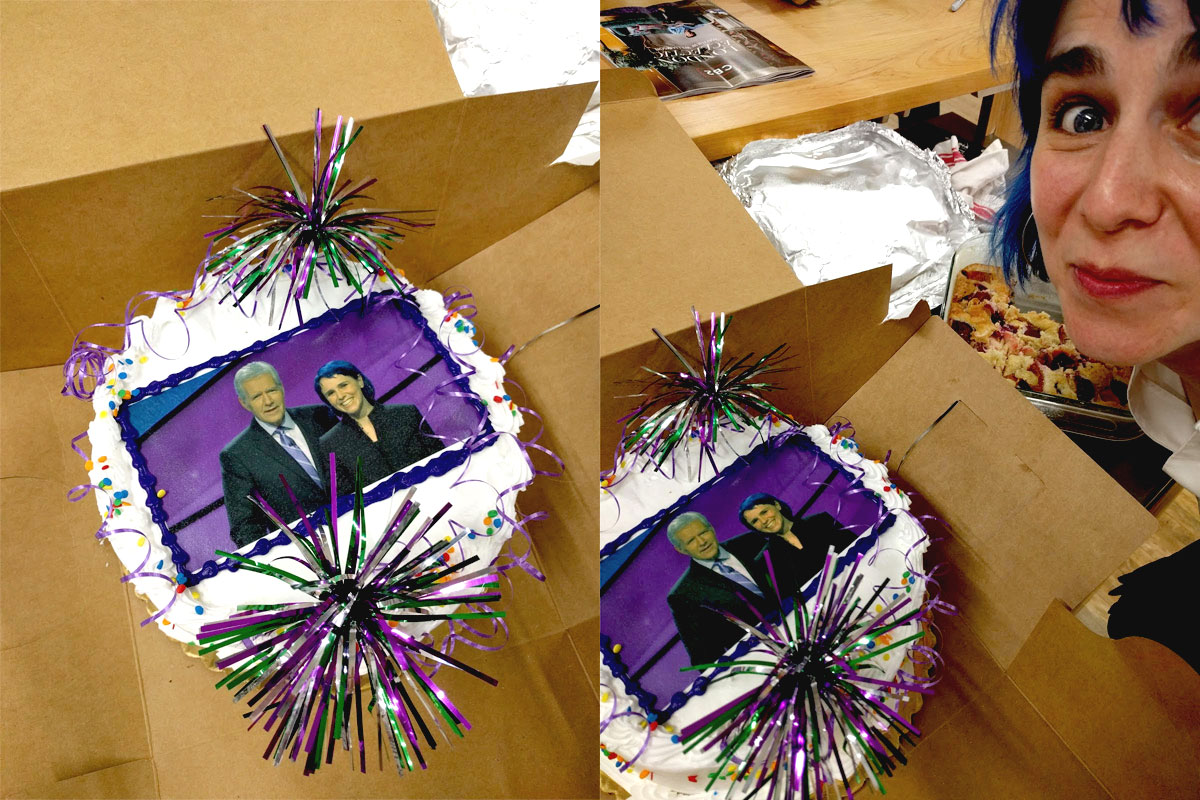